“The Right Thing” by Scott Waddle

Title:  “The Right Thing”
Publisher: Integrity Publishers, A division of Integrity Media, Inc., 2002Non-fiction book, describing first-hand events aboard the USS Greeneville, 242 pages$21.99
Book Review by Michael Young
Commander Scott Waddle was a devout United States Naval Officer who found himself in a life-changing event in the afternoon of February 9, 2001.  A “freak” collision accident between his Nuclear Submarine, the USS Greeneville and the fishing vessel, Ehime Maru resulted in a formal Naval inquiry which subsequently cost Commander Waddle his naval career.  In one, brief, eight minute period, the lives of nine Japanese civilians were taken accompanied by life-long suffering and anguish, experienced by the crew and Officers of the USS Greeneville.
The Author:
Scott Waddle spent his entire life in and around the United States military.  His father, a retired Lieutenant Colonel with the United States Air Force, served a distinguished military career flying fighter jets all over the world.  Instinctively, Scott wanted to follow in his father’s footsteps; however, due to a sinus problem, flying was not in the “cards” for Scott.
With Scott’s dreams of being a pilot fading in the United States Air Force, a secondary thought of piloting aircraft for the Unites States Navy grew.  However, another less than favorable report from the Navy surgeon regarding Scott’s nasal problem further revealed Scott would never find himself within the cockpit of an aircraft.  The Navy, on-the-other-hand had another idea for Scott.  A career as a submariner looked intriguing and best of all, there were no stipulations with regards to nasal or sinus issues.
Scott worked his way up the naval career ladder as a decorated and accomplished officer.  Various Navy assignments found Scott all over the world which subsequently resulted in a duty station at Pearl Harbor, Hawaii.  Now married and a father of one, Scott was at the top of his career serving as the Captain aboard the nuclear submarine, USS Greeneville.  With his future looking bright, a series of bad events accompanied by a few minutes of lackadaisical procedures implementation, the future of Commander Scott Waddle was instantly changed on 9 FEB 01 when his submarine collided with a Japanese fishing trawler off the coast of Pearl Harbor, Hawaii.  Despite Scott’s impeccable reputation as a decorated Naval Officer and clean track record, his numerous qualifications, degrees, and method of strict policy adherence came into question as Scott now faced his peer’s and friends before a United States Naval inquiry.
This is the first and only book authored by Scott Waddle.  It describes the firs-hand events of the tragic collision as they took place.  The events which lead up to the collision are intriguing as the leader learns and acquires a sense of what children within a military family might feel as they find themselves in new locations all over the world.  Even more interesting about the author, the reader learns of anguish, remorse, and hatred from the many life’s this tragic event encompassed towards the author.  Scott Waddle literally had to “put worlds back together” which included families of the nine deceased Japanese civilians, the crew of the USS Greeneville which included not only the author’s life, but his wife and daughter’s life as well.
Book Review: 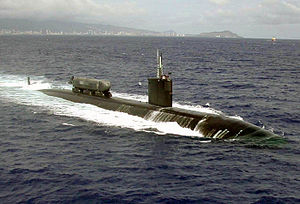 “The Right Thing” is book about honesty, integrity, tragedy, and life lessons.  As a reader involved in supervision and leading of personnel, I found this book to be a “guide” of what to do, what not to do and how to view one’s own career.  Scott Waddle was a career naval officer, who undoubtedly would have found himself among high ranking Navy commanding Officers.  His life was a journey trying to achieve the esteemed upper echelon levels within his branch of Military service.  Ironically, within mere minutes of that fateful collision between the USS Greeneville and the Ehime Maru, Scott quickly realized that everything he had done and aspired to do in his life’s journey of hard work, education, and steadfast dedication to the United States Navy was now sinking into the oceanic waters along with the crippled remains of the Ehime Maru off the coast of Pearl Harbor, Hawaii.
“The Right Thing” is exactly the type of book every aspiring leader should seek out and read.  As this is not a scholarly book, it quite easily could find itself a required read within programs pertaining to leadership and supervision.  The author describes in detail his many different jobs and titles which directly affect leadership, training, preparation, and delivery of services as he strived for high remarks from his peers and favorable reflections from those he commanded and affiliated with.  Readers who find themselves in similar occupations dealing with leadership and supervision will find the author’s experiences and outlines beneficial and noteworthy as they prepare and strive to achieve similar accomplishments within their own work place.
Additionally, readers of this book will find the importance of “owning up to one’s own mistakes”.  Commander Waddle found himself in a situation of “trying to please the crowd”.  As a result of this crowd pleasing, Commander Waddle failed to follow his own policies and commonly found practices of “doing things by the book”.  This failure to follow standardized procedures directly resulted in the accidental collision between the USS Greeneville and theEhime Maru.  Commander Waddle found himself defending his decisions and “owning up to his mistakes” before a formal Navy board of inquiries which subsequently cost Commander Waddle his command of the USS Greeneville, his career within the United States Navy as well as countless friends, colleagues, and his reputation.  It would have been easy to blame the failed SONAR contact of the Ehime Maru on those crew members who had been tasked with tracking any contacts within the vicinity of the USS Greeneville; however, as Commander Waddle states, “the buck stops here” and he describes his decision to accept any and all successes and failures which took place on-board the USS Greeneville during his command.
Conclusion:
Commander Scott Waddle’s career as a naval Officer is to be commended.  His integrity and character is that which is found to be in the highest degree of quality.  The collision between the USS Greeneville and Ehime Maru was nothing more than a “freak accident” and couldn’t be recreated in a thousand years.  The forever life-changing outcomes of this incident will remain in history as one of the most tragic submarine accidents in the history of the United States Navy.  However, the integrity which is displayed by Commander Waddle is also a story which should be remembered and outlined in the future to come.  Leading by example is a quality found to little amongst today’s emerging leadership.  “The Right Thing” is guide to be followed, recognized, and lived among leaders, supervisors and persons aspiring to levels of leadership.  I would highly recommend this book to all.  It is a very interesting and moving read!