How tragedy affected a city's people 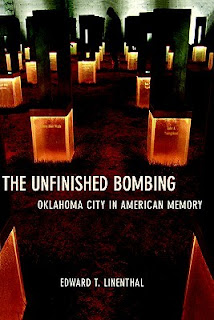 A Review by Julie Bowman
Linenthal’s book, The Unfinished Bombing – Oklahoma City in American Memory, tells the story of the people of Oklahoma City and beyond in the aftermath of the 1995 bombing of the Alfred P. Murrah Federal Building in Oklahoma City.  The book focuses on the survivors, the residents of Oklahoma City, and the nation at large and the ways they all have struggled to find meaning and some sense of understanding in the five years after the bombing took place.  This is not a book about the bombing itself, and while I knew that opening the cover, I still expected to read a rehashed version of the actual events that occurred on April 19, 1995.  Instead, I found myself reading personal stories of survivors and family members and the many and varied ways in which not only did the event impact them, but how they have survived in the aftermath.  Linenthal’s book could be broken down into five parts:
Oklahoma City fell into history long before the bombing of the Murrah building when Native American’s were forcibly relocated there in the 1820s and then again during the homestead land grabs in the 1880s and 1890s.  However, Linenthal reminds us that these events and others did not violate “the assumed security and sanctity of the heartland” in the manner of the 1995 bombing.  We are told Oklahoma City fell into history because we were attacked from within by two of our own seemingly Americanized men, both having served honorably in the United States military.  We are reminded in the book that not only was the nation quick to blame some unknown Muslim group for the bombing, but when the pictures of the actual perpetrators were posted throughout the news for us to see, we wanted to deny the possibility that we could have possibly been attacked by our own.  “Despite the tenaciousness of the convictions of innocence, the bombing was widely felt as a fall into history, as if a contemporary Pandora’s box had been opened” (Linenthal, 2001).  We are told of the many different political voices – those looking for the “good” and those who thought the bombing would create a widespread climate of fear in the nation.  Ironically, Linenthal’s book did not reach bookstore shelves until a month after the events of 9/11, yet one can still hear these same differing political voices now speaking about New York City.

Three Narratives
Linenthal uses three different narratives that tell three very different versions of the aftermath of the events of April 19, 1995.  This is what I believe to be the “meat” of the story.     First, the progressive narrative focuses on the sense of caring and connection that was created in a disaster shared by the community.  The progressive tells of the desire and determination the citizens of Oklahoma City possessed to find the positive in the tragedy.   Linenthal writes how the progressive narrative “invites people to focus on possibility, opportunity, healing, rebuilding.”  One such story the Author includes in the progressive narrative is that of a nurse, Rebecca Anderson, who is described as having “rushed into the building to help, was struck by falling concrete, and died four days later.  Her heart, liver, kidneys, and eyes were transplanted” (Linenthal, 2001).  Her desire and the desire of her family to donate her organs was truly a positive outcome from the tragedy.

The redemptive narrative shows the widely varied response of the religious community in their own attempts to find meaning out of the events.  Linenthal refers to this as the “crisis of meaning” produced by the bombing.  One example Linenthal uses to illustrate the crisis of meaning is that of an FBI chaplain who told the author “My belief in the sovereignty of God is that he could have prevented it but he didn’t and I don’t know why” (Linenthal, 2002).  The redemptive narrative seeks to find reconciliation in the irreconcilable.

Finally, we are taken to the toxic narrative in the story.  Toxic, Linenthal explains, in a manner opposite the progressive narrative.  “Just as the bomb brought the community and many families together, it also strained relations in offices and homes” (Linenthal, 2002).  The story tells the reader of Doris Jones, who lost her daughter, Carrie, in the bombing.  Carrie was pregnant when she was murdered in the bombing and while Jones had always had a good relationship with her son-in-law, the relationship fractured after three years, when he began a new relationship.  Jones said she could not get over how he was able to move on and find a new love, but that she would never have another daughter.  The toxic narrative also focuses on the lasting impacts to fire fighters and other rescue personnel, the conspiracy theories, resentment toward the very people sent to aid the survivors and the victims’ families, and the controversy surrounding the distribution of relief funds.  The toxic narrative also covers what Linenthal calls the “traumatic vision”, a debate questioning just who the bombing victims really were.
As the book progresses through to the “new world”, we are taken inside the wounded community that Oklahoma City had become.  We experience the lunacy of the sheer volume of mental health workers that descended upon the city; many of whom were young counselors who had no experience with death or its related issues.  “To say they were traumatized by the stories they heard is an understatement” (Linenthal, 2002).  Linenthal looks at the ways grief was medicalized (how many of the “wounded” needed a name for what they were suffering), the way grief played out actively in the media (Kathleen Treanor who lost three family members recalled, “We were one of two families who had lost three people.  The media could get one-stop shopping with us.”), and through legislation (the victims bill of rights).
Next, Linenthal takes us through the memorial process.  First by examining Americans’ need to memorialize and then on to the memorial project itself.  Within hours, we are told, there were countless memorial ideas floating around Oklahoma City.  Linenthal has spent time studying the history of this American need to permanently memorialize everything; everything from the victims of an auto accident alongside the road, to the Holocaust through his work for the National Holocaust Museum in Washington, D.C.  The author writes “When people have died a sudden, violent death there is an understandable impulse to replace the senselessness of the violence with some kind of meaning.”  Linenthal goes through the process of determining what kind of memorial Oklahoma City would have.  Initially, we are taken to the fence and the makeshift memorial that was created next to the still standing remains of the Murrah building and on through the political wrangling, heated debate, and finally a committee that came together to sponsor the design process.  Recognizing the need for one memorial agenda, then Mayor Norick pulled together a handful of people to take control of the memorial committee.  A prominent Oklahoma City attorney, Robert Johnson, was chosen to head the group.  He understood the importance of working from a mission statement and how that could bring many fractured groups together working for a common goal.  We are told, “Through a painstaking process they learned to work together, crafting a mission statement that declared the memorial would be shaped primarily by the sensibilities of family members and survivors.  It would not be done for them, but it would be done bythem.”  Linenthal’s examination of the process to design the memorial was painstaking to read at times, but the reader is able to gain a genuine  understanding of the arduous process this memorial was from his writing.
Linenthal recognizes that out of the three different narratives, there are also bonds between them, bonds he refers to as bonds of affection.  He writes:
“Therefore, it seems appropriate to conclude with examples of the bonds of affection that exist alongside the toxic impact of the bombing.  There were publically invisible bonds, for example, between recovery personnel and family members of the loved ones whose bodies they had located or brought out of the building, was well as bonds between rescuers and survivors.  There were also bonds of affection that brought together people from different cultures impacted by mass death, transnational links between bereaved communities.”  “They do not in any way lessen the impact of the toxic narrative.  They do, however, say something about human determination to offer acts of kindness and caring in the face of acts that threaten to obliterate our confidence in the power of the humane.”
Linenthal, in his book The Unfinished Bombing—Oklahoma City in American Memory, is able to give us a small view of what happened AFTER the bombing and provides the details of how a National Memorial that almost didn’t, came to be.  168 men, women and children died in the bombing of the Alfred P. Murrah building on April 19, 1995.  They each left behind a personal legacy that for a time became the property of the American public at large.  Linenthal does an excellent job getting the reader to consider his or her own perceptions and actions after this or another tragic event.    Having visited Oklahoma City and the memorial myself, I found Linenthal’s book a fascinating read.  It provided insight and understanding into what I had seen and experienced there.

About the Author
Edward T. Linenthal is a Professor of Religion and American Culture at the University of Wisconsin, Oshkosh.  He has written several books exploring the creation of history through historical events and how that information is then delivered to the public. Linenthal has also spent time extensively reviewing how Americans memorialize tragic events and the sites where they occur.  Other books he has written include Sacred Ground: Americans and Their Battlefield, and Preserving Memory:  The Struggle to Create America’s Holocaust Museum.  In 2002, Linenthal was named to serve as a special advisor to the National Park Service Public Programs, and was tasked to provide necessary consultation for the memorialization of the events of September 11 as well as the “National Park Service and Civic Dialogue” initiative.