What to do in an earthquake

Salt Lake City, Utah (March 18, 2020) - An early morning 5.7 magnitude woke up some residents along Utah's Wasatch front. Aftershocks continued throughout the day. By the evening some 60 aftershocks had occurred. 50,000 residents were without power. Damage was minimal and no injuries were reported.

However, a number of buildings were damaged and some falling debris landed on the streets and sidewalks. Downtown workers who were not home already because of the corona virus were told to stay home.

In an earthquake, the best advice is DROP,  COVER, and HOLD ON. Get under a desk or a table, not in a doorway. 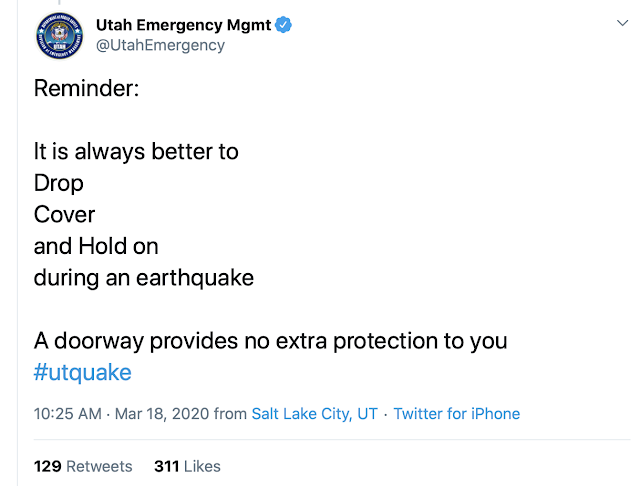 Even in a taller building, Utah Emergency Management recommends it is better to stay indoors until the earthquake has stopped. Then, go out only if you are going to move to a safer location.

When thousands of people were evacuated from the Salt Lake City airport, it was only after it was deemed safe to go outside.